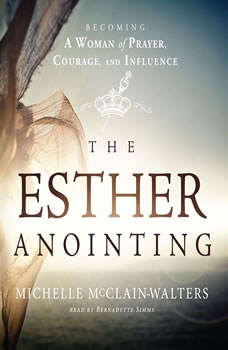 The Esther Anointing: Becoming a Woman of Prayer, Courage, and Influence

Be inspired by Esther, an incredible woman of God.
Esther was willing to risk her life for the welfare of her people and the furthering of God’s plan. Strategically positioned by God in a place of influence, Esther is a powerful biblical example of how God can use anyone. She answered God’s call and went through a season of preparation physically and spiritually to get ready.

Just like in biblical times, God is positioning women today and giving them divine opportunities to influence the culture for His glory. The Esther Anointing gives you the keys to Esther’s success, including the qualities that make women great, the power of influence, and the key to finding God’s favor for your assignment.

It doesn’t matter where you came from or what skills and talents you have; if you let Him, God can use your life for His glory!

The Whole Christ: Legalism, Antinomia...
by Sinclair B. Ferguson

Where I Am
by Billy Graham

Jesus and the Jewish Roots of the Euc...
by Brant Pitre

The Gospel According to Jesus
by John F. MacArthur

The Gospel's Power and Message
by Paul Washer