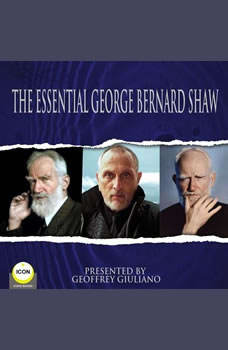 George Bernard Shaw was an Irish playwright, critic, polemicist and political activist. His influence on Western theatre, culture and politics extended from the 1880s to his death and beyond. He wrote more than sixty plays, including major works such as Man and Superman. With a range incorporating both contemporary satire and historical allegory, Shaw became the leading dramatist of his generation. Since his death he has regularly been rated as second only to Shakespeare among British dramatists. Here in this exciting audiobook experience you will find the very best of George Bernard Shaw’s vibrant personality and inspirational words. A rare audiobook adventure!ContentsGEOFFREY GIULIANO is the author of thirty two internationally best selling books published by the biggest publishers in the world from 1984 to today. He is also an acclaimed Hollywood film actor, director, designer, and is the voice on over 500 popular audiobooks.Series producer Avalon Giuliano in New York Produced by Alex Franchi in Milan Edited and mixed by Macc Kay in BangkokICON intern Eden Garret Giuliano

This program is read by the authorA guide to all kinds of addiction from a star who has struggled with heroin, alcohol, sex, fame, food and eBay, that will help addicts and their loved ones make the first steps into recovery“This manual for se...

This program includes a prologue and epilogue read by the author.From New York Times culture reporter Dave Itzkoff, comes the definitive audiobook biography of Robin Williams – a compelling portrait of one of America’s most beloved and m...

Nominated for a 2014 Grammy in the Spoken Word category!Hilarious and heartfelt observations on aging from one of America's favorite comedians, now that he's 65, and a look back at a remarkable career.Billy Crystal is 65, and he's not happy about it...

My Voice
by Angie Martinez

THE NEW YORK TIMES BESTSELLERAngie Martinez is the “Voice of New York.” Now, for the first time, she candidly recounts the story of her rise to become an internationally celebrated hip hop radio icon.   In her current reign at Power...

Charlamagne Tha God—the self-proclaimed “Prince of Pissing People Off,” co-host of Power 105.1’s The Breakfast Club, and “hip-hop’s Howard Stern”—shares his unlikely success story as well as how embrac...

Born Standing Up
by Steve Martin

The Emmy and Grammy Award-winner's candid, spectacularly amusing memoir of his years in stand-up In the mid-seventies, Steve Martin exploded onto the comedy scene. By 1978 he was the biggest concert draw in the history of stand-up. In 1981 he quit...

A hilarious and biting memoir from the actor, comedian and Saturday Night Live alumni.David Spade is best known for his harsh "Hollywood" Minute Sketches on SNL, his starring roles in movies like Tommy Boy and ...

From actor Cary Elwes, who played the iconic role of Westley in The Princess Bride, comes a first-person account and behind-the-scenes look at the making of the cult classic film filled with never-before-told stories, exclusive photographs, and inte...

Stories I Only Tell My Friends
by Rob Lowe

A wryly funny and surprisingly moving account of an extraordinary life lived almost entirely in the public eyeA teen idol at fifteen, an international icon and founder of the Brat Pack at twenty, and one of Hollywood's top stars to this day, Rob Low...