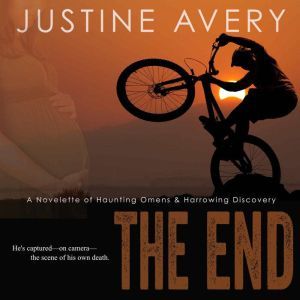 The End: A Novelette of Haunting Omens & Harrowing Discovery

It's impossible but it's on-screen. He's captured—on camera—the scene of his own death.

One weekday to the next, Trevor quietly fulfills his roles as loving husband and father-to-be, trusted best friend, and dependable employee. He's chosen normality, routine, simplicity, even predictability: everything he never had as a child. And he prefers it that way.And then comes Saturday.The weekends are Trevor's alone. On the weekends, Trevor is king.Charging into the beckoning canyonlands of southern Utah, Trevor seeks out true challenge without hesitation, dares the ever-changing terrain to test his finest skill, and defies death itself as he pushes his mind and body to the max.He is the Weekend Warrior. Master of his machine. Trevor is a freeride mountain biker, and when he rides, the earth is at his command. Of course, he has to capture it all on camera. Trevor never rides without his helmet-mounted GoPro, recording the real-time video of his every triumph and technical maneuver.But this Saturday, the camera captures so much more. When Trevor presses the play button, eager to relive the thrilling moments of his impressive, recent ride, the scene that plays out before him on the television screen ends in an unexpected way. The footage is more than captivating; it's horrifying.They say that, in this age of advanced technology, if it wasn't filmed, it never happened. But what if it hasn't happened—yet—and it's already on film?

He has only two options: succumb to his fate the footage foretells or fight—to the death if need be—for his very own life.