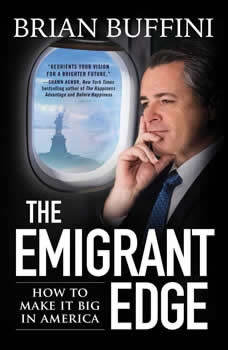 The Emigrant Edge: How to Make It Big in America

Brian Buffini, an Irish immigrant who went from rags to riches, shares his strategies for anyone who wants to achieve the American dream.Born and raised in Dublin, Ireland, Brian Buffini immigrated to San Diego, California at the age of nineteen with only ninety-two dollars in his pocket. Since then, he has become a classic American rags-to-riches story. After discovering real estate, he quickly became one of the nation’s top real estate moguls and founder of the largest business training company, Buffini & Co., in North America. But Brian isn’t alone in his success: immigrants compose thirteen percent of the American population and are responsible for a quarter of all new businesses. In fact, Forbes magazine boasts that immigrants dominate most of the Forbes 400 list. So what are the secrets? In The Emigrant Edge, Brian shares seven characteristics that he and other successful immigrants have in common that can help anyone reach a higher level of achievement, no matter their vocation. He then challenges readers to leave the comfort of their current work conditions to apply these secrets and achieve the success of their dreams.

The definitive playbook by the pioneers of Growth Hacking, one of the hottest business methodologies in Silicon Valley and beyond. It seems hard to believe today, but there was a time when Airbnb was the best-kept secret of travel hackers and couch...

Live It!
by Jairek Robbins

Every person you meet is either a warning or an example. Which are you?Jairek Robbins, decorated performance coach and lifestyle entrepreneur, guides you through his proven, step-by-step process for filling the gap between where you are today and wh...