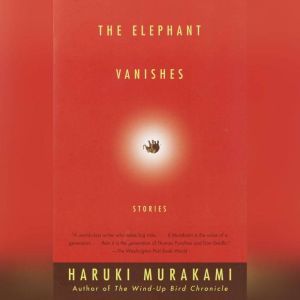 With the same deadpan mania and genius for dislocation that he brought to his internationally acclaimed novels A Wild Sheep Chase and Hard-Boiled Wonderland and the End of the World, Haruki Murakami makes this collection of stories a determined assault on the normal. A man sees his favorite elephant vanish into thin air; a newlywed couple suffers attacks of hunger that drive them to hold up a McDonald's in the middle of the night; and a young woman discovers that she has become irresistible to a little green monster who burrows up through her backyard.

By turns haunting and hilarious, The Elephant Vanishes is further proof of Murakami's ability to cross the border between separate realities -- and to come back bearing treasure.

The elephant vanishes / stories by Haruki Murakami; translated from the Japanese by Alfred Birnbaum and Jay Rubin.—1st Vintage International ed.

The stories on these CD's take on two forms: either complete but banal or inexplicable and unsatisfying. The former are merely dull. The latter are extraordinarily compelling. They begin with unexpectedly odd events, e.g. a woman no longer requiring sleep, television deliverymen that no one can see, a phone call by an unknown woman trying to make an emotional connection in 10 minutes to a man who doesn't know her. But none of these stories are finished. This isn't the case of a story concluding while leaving the events in the story ongoing. Instead, each of these stories feels as though the author took a break for lunch and never came back as if he fully intended to write more but never got the chance. Thus, I found the stories, while interesting, very unsatisfying. I managed to make it through 6 of the 8 CD's before deciding that I'd really rather be listening to something else.