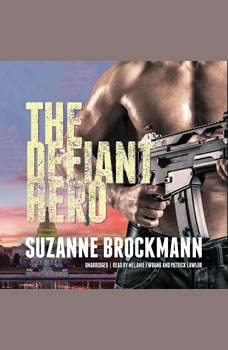 There are eight words Meg Moore has never been able to forget: the United States refuses to negotiate with terrorists. But what was merely a chilling warning when she worked as a translator in a European embassy now spells out a potential death sentence for her daughter and grandmother, who have been kidnapped by a lethal group called the Extremists. Meg has to actand quickly. Going against everything she was taught, she will now do anything to meet their unspeakable demands; anythingeven killto save her child. When Navy SEAL Lieutenant, junior grade, John Nilsson is summoned to Washington, DC, by the FBI to help negotiate a hostage situation, the last person he expects to see holding a foreign ambassador at gunpoint is Meg. He hasnt seen her in years, but hes never forgotten how it feels to hold her in his arms. John could lose his career if he helps her escape. She will lose her life if he doesnt.

The Defiant Hero
The Troubleshooters Series #2