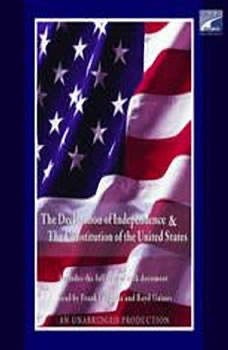 The Declaration of Independence and the Constitution of the United States

The two most treasured documents of American freedom together on one audiobook.

We hold these truths to be self-evident, that all men are created equal…
Drafted by Thomas Jefferson in 1776 as an act of rebellion, The Declaration of Independence powerfully expresses the political principles of an emerging nation. As justification for severing ties with England, The Declaration presented a list of grievances against the King and declared the colonies to be sovereign states.

We the People of the United States, in Order to form a more perfect Union, establish Justice, insure domestic Tranquility, provide for the common defence, promote the general Welfare, and secure the Blessings of Liberty to ourselves and our Posterity, do ordain and establish this Constitution for the United States of America.
Ratified in 1788, The Constitution remains a shining example of patriotism and compromise. In outlining the power of the three branches of government and establishing the rights of all Americans, The Constitution united the 13 independent states and set forth the official viewpoint of a newly unified nation. Its most significant and insightful feature is that it can always be amended.