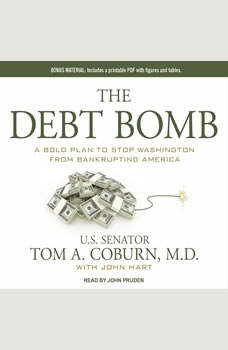 The Debt Bomb: A Bold Plan to Stop Washington from Bankrupting America

In a nation whose debt has outgrown the size of its entire economy, the greatest threat comes not from any foreign force but from Washington politicians who refuse to relinquish the intoxicating power to borrow and spend. Senator Tom Coburn reveals the fascinating, maddening story of how we got to this point of fiscal crisis—and how we can escape. Long before America's recent economic downturn, beltway politicians knew the U.S. was going bankrupt. Yet even after several so-called "change" elections, the government has continued its wasteful ways in the face of imminent danger. With passion and clarity, Coburn explains why Washington resists change so fiercely and offers controversial yet commonsense solutions to secure the nation's future. At a time when millions of Americans are speculating about what is broken in Washington, The Debt Bomb is a candid, thoughtful, nonpartisan exposé of the real problems inside our government. Coburn challenges the conventional wisdom that blames lobbyists, gridlock, and obstructionism, and places the responsibility squarely where it belongs: on members of Congress in both parties who won't let go of the perks of power to serve the true interests of the nation-unless enough citizens take bold steps to demand action. Throughout a distinguished career as a business owner, physician, and U.S. senator, Tom Coburn has watched his beloved republic careen down a suicidal path. Today, the nation stands on the precipice of financial ruin, a disaster far more dangerous to our safety than any terrorist threats we face. Yet Coburn believes there is still hope—if enough Americans are willing to shake the corridors of Washington and demand action. With an insider's keen eye and a caregiver's deft touch, Coburn diagnoses the mess that career politicians have made of things while misusing their sacred charge to govern. Coburn's incisive analysis: Reveals the root causes of America's escalating financial crisisExposes Washington's destructive appetite for wasteful spending, power grabs, backroom deals, and quick nonfixesRises above partisanship to implicate elected officials of all stripes in steering the nation off courseLays out a commonsense guide to restoring orderConcludes with a clarion call and sound advice for Americans dedicating themselves to defusing the debt bomb Above all, Coburn believes the United States can continue as a beacon of opportunity for future generations—but how we act today will determine whether we deliver the nation to our children and grandchildren fully alive, on life support, or without a pulse.