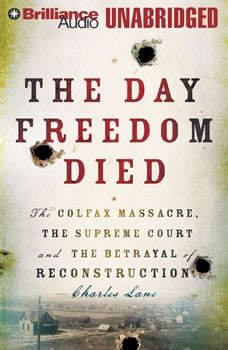 The Day Freedom Died: The Colfax Massacre, the Supreme Court, and the Betrayal of Reconstruction

America after the Civil War was a land of shattered promises and entrenched hatreds. In the explosive South, danger took many forms: white extremists loyal to a defeated world terrorized former slaves, while in the halls of government, bitter and byzantine political warfare raged between Republicans and Democrats. In The Day Freedom Died, Charles Lane draws us vividly into this war-torn world with a true story whose larger dimensions have never been fully explored. Here is the epic tale of the Colfax Massacre, the mass murder of more than sixty black men on Easter Sunday 1873 that propelled a small Louisiana town into the center of the nation’s consciousness. As the smoke cleared, the perpetrators created a falsified version of events to justify their crimes. But a tenacious Northern-born lawyer rejected the lies. Convinced that the Colfax murderers must be punished lest the suffering of the Civil War be in vain, U.S. Attorney James Beckwith of New Orleans pursued the killers despite death threats and bureaucratic intrigue - until the final showdown at the Supreme Court of the United States. The ruling that decided the case influenced race relations in the United States for decades. An electrifying piece of historical detective work, The Day Freedom Died brings to life a gallery of memorable characters in addition to Beckwith: Willie Calhoun, the iconoclastic Southerner who dreamed of building a bastion of equal rights on his Louisiana plantation; Christopher Columbus Nash, the white supremacist avenger who organized the Colfax Massacre; William Ward, the black Union Army veteran who took up arms against white terrorists; Ulysses S. Grant, the well-intentioned but beleaguered president; and Joseph P. Bradley, the brilliant justice of the Supreme Court whose political and legal calculations would shape the drama’s troubling final act. Charles Lane captures every exciting element of this electrifying saga, from the horror at Colfax, to the political battles that threatened the Grant presidency, to the dramatic courtroom battles that changed history. The Day Freedom Died is a gripping account of the events that gave the Civil War a monumental final chapter and an era in which the often brutal struggle for equality moved from battlefields into communities across the nation.