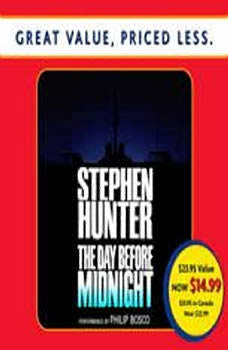 The Day Before Midnight

“A breathtaking, fascinating look at what could happen—given the possibility of an atomic ‘given.’ A wrap-up you'll never forget.”—Robert Ludlum

All that stands between the Uzi-armed commandos and the launch button is a half-ton titanium block. They want Jack Hummel to cut through it—so they can unleash a devastatingly brilliant plot that threatens global disaster.

Now a Delta Force veteran and a think-tank defense wizard must get inside South Mountain—by defeating their own super-security systems and a darkly ingenious enemy leader . . .

. . . while Jack Hummel's torch burns closer and closer to the launch key . . . while the clock ticks closer to midnight—and Armageddon.

Praise for The Day Before Midnight

“Rockets toward a shattering climax like an incoming missile.”—Stephen Coonts, author of Flight of the Intruder and Final Flight

“The novel crackles and jolts.”—Chicago Tribune

“The one to beat this year in the nail-biter class . . . an edge-of-the-seat doomsday countdown thriller.”—Daily News, New York