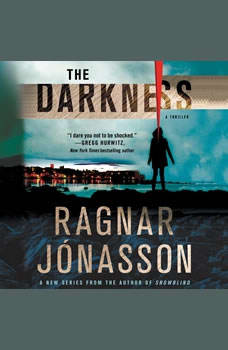 The Darkness: A Thriller

"Narrator Amanda Redman gives an adept performance as she takes on the various characters in this Icelandic thriller." — AudioFile MagazineSpanning the icy streets of Reykjavik, the Icelandic highlands and cold, isolated fjords, The Darkness is an atmospheric thriller from Ragnar Jonasson, one of the most exciting names in Nordic Noir.The body of a young Russian woman washes up on an Icelandic shore. After a cursory investigation, the death is declared a suicide and the case is quietly closed.Over a year later Detective Inspector Hulda Hermannsdottir of the Reykjavik police is forced into early retirement at 64. She dreads the loneliness, and the memories of her dark past that threaten to come back to haunt her. But before she leaves she is given two weeks to solve a single cold case of her choice. She knows which one: the Russian woman whose hope for asylum ended on the dark, cold shore of an unfamiliar country. Soon Hulda discovers that another young woman vanished at the same time, and that no one is telling her the whole story. Even her colleagues in the police seem determined to put the brakes on her investigation. Meanwhile the clock is ticking.Hulda will find the killer, even if it means putting her own life in danger.

The Darkness: A Thriller
The Hulda Series #1

The Island
The Hulda Series #2

The Mist
The Hulda Series #3