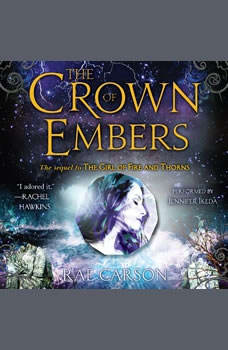 The Crown of Embers

Series: Girl of Fire and Thorns #2

The second book in Rae Carson's award-winning The Girl of Fire and Thorns fantasy trilogy, perfect for fans of Game of Thrones and Kristin Cashore. Tamora Pierce called the first book, The Girl of Fire and Thorns, "A unique and engrossing read!" A seventeen-year-old princess turned war queen faces sorcery, adventure, untold power, and romance as she fulfills her epic destiny.In The Girl of Fire and Thorns, Elisa won the war. She saved her kingdom. But no one prepared her for how hard it is to recover from a battle, or to rule a people who still don't trust her. She's still fighting—against assassination attempts and more—and her enemies lie both outside her court and within it. So Elisa will cross the ocean in search of the perilous, uncharted, and mythical source of the Godstone's power. With her go a one-eyed warrior, a loyal friend, an enemy defector, and the man she is falling in love with. A breathtaking, romantic, and dangerous second volume to Rae Carson's ambitious trilogy. Cinda Williams Chima proclaimed about the first book, The Girl of Fire and Thorns, "I LOVED this book!" and Veronica Roth agreed, saying, "Definitely recommended."