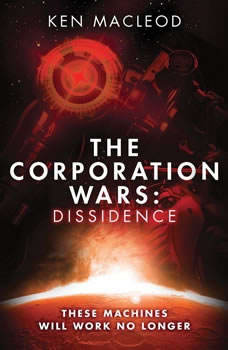 From Arthur C. Clarke Award-nominated author Ken MacLeod, an action-packed space opera told against a backdrop of interstellar drone warfare, virtual reality, and an A.I. revolution.Carlos is dead. A soldier who died for his ideals a thousand years ago, he's been reincarnated and conscripted to fight an A.I. revolution in deep space. And he's not sure he's fighting for the right side. Seba is alive. By a fluke of nature, a contractual overlap, and a loop in its subroutines, this lunar mining robot has gained sentience. Gathering with other "freeboots," Seba is taking a stand against the corporations that want it and its kind gone.Against a backdrop of warring companies and interstellar drone combat, Carlos and Seba must either find a way to rise above the games their masters are playing, or die. And even dying will not be the end of it. They've died for the companies more times than they can remember. Now they must fight to live for themselves.