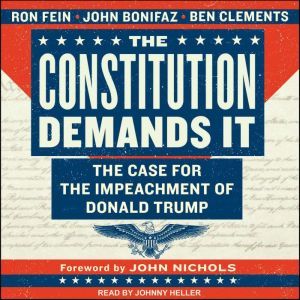 The Constitution Demands It: The Case for the Impeachment of Donald Trump

The reasons Donald Trump must be impeached—as per the Founding Fathers—and what you can do to help make that happen Three veteran constitutional attorneys say there's no way around it: The Constitution demands that Donald Trump must be impeached. And in clear language using compelling logic rooted firmly in the Constitution, they detail why the time to start is now—not in the indefinite future after criminal investigations have ended. In fact, much of Trump's impeachable conduct lies outside the scope of ongoing federal criminal investigations. Citing charges such as accepting illegal payments from foreign governments, using government agencies to persecute political enemies, obstructing justice, abusing the pardon power, and the undermining freedom of the press, they provide the factual and legal basis for eight articles of impeachment. In short, they argue, abuses threatening our constitutional democracy should be dealt with by the remedy that the Constitution provides for a lawless, authoritarian president: impeachment. And an informed citizenry should be part of the process. After all, they say, impeachment is not a constitutional crisis—impeachment is the cure for a constitutional crisis.