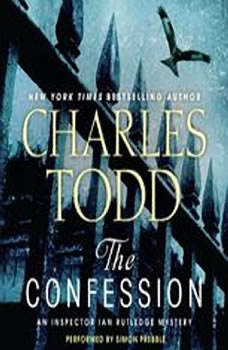 Scotland Yard’s best detective, Inspector Ian Rutledge, must solve a dangerous case that reaches far into the past in this superb mystery in the acclaimed seriesDeclaring he needs to clear his conscience, a dying man walks into Scotland Yard and confesses that he killed his cousin five years earlier during the Great War. When Inspector Ian Rutledge presses for details, the man evades his questions, revealing only that he hails from a village east of London. With little information and no body to open an official inquiry, Rutledge begins to look into the case on his own. Less than two weeks later, the alleged killer’s body is found floating in the Thames, a bullet in the back of his head. Searching for answers, Rutledge discovers that the dead man was not who he claimed to be. What was his real name—and who put a bullet in his head? Were the “confession” and his own death related? Or was there something else in the victim’s past that led to his murder? The inspector’s only clue is a gold locket, found around the dead man’s neck, that leads back to Essex and an insular village whose occupants will do anything to protect themselves from notoriety. For notoriety brings the curious, and with the curious come change and an unwelcome spotlight on a centuries-old act of evil that even now can damn them all.