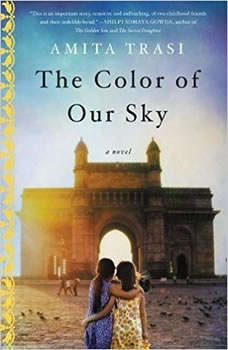 The Color of Our Sky

In the spirit of Khaled Hosseini, Nadia Hashimi and Shilpi Somaya Gowda comes this powerful debut from a talented new voice—a sweeping, emotional journey of two childhood friends in Mumbai, India, whose lives converge only to change forever one fateful night.India, 1986: Mukta, a ten-year-old village girl from the lower caste Yellama cult has come of age and must fulfill her destiny of becoming a temple prostitute, as her mother and grandmother did before her. In an attempt to escape her fate, Mukta is sent to be a house girl for an upper-middle class family in Mumbai. There she discovers a friend in the daughter of the family, high spirited eight-year-old Tara, who helps her recover from the wounds of her past. Tara introduces Mukta to an entirely different world—one of ice cream, reading, and a friendship that soon becomes a sisterhood. But one night in 1993, Mukta is kidnapped from Tara’s family home and disappears. Shortly thereafter, Tara and her father move to America. A new life in Los Angeles awaits them but Tara never recovers from the loss of her best friend, or stops wondering if she was somehow responsible for Mukta's abduction.Eleven years later, Tara, now an adult, returns to India determined to find Mukta. As her search takes her into the brutal underground world of human trafficking, Tara begins to uncover long-buried secrets in her own family that might explain what happened to Mukta—and why she came to live with Tara’s family in the first place. Moving from a traditional Indian village to the bustling modern metropolis of Mumbai, to Los Angeles and back again, this is a heartbreaking and beautiful portrait of an unlikely friendship—a story of love, betrayal, and, ultimately, redemption.

With his single mother in jail, Sequoyah, a fifteen-year-old Cherokee boy, is placed in foster care with the Troutt family. Literally and figuratively scarred by his unstable upbringing, Sequoyah has spent years mostly keeping to himself, living wit...