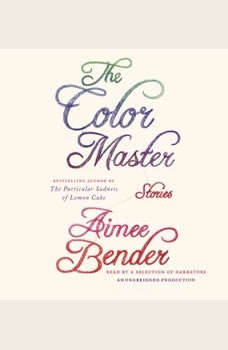 The bestselling author of The Particular Sadness of Lemon Cake returns with a wondrous collection of dreamy, strange, and magical stories.

Truly beloved by readers and critics alike, Aimee Bender has become known as something of an enchantress whose lush prose is “moving, fanciful, and gorgeously strange” (People), “richly imagined and bittersweet” (Vanity Fair), and “full of provocative ideas” (The Boston Globe). In her deft hands, “relationships and mundane activities take on mythic qualities” (The Wall Street Journal).

In this collection, Bender’s unique talents sparkle brilliantly in stories about people searching for connection through love, sex, and family—while navigating the often painful realities of their lives. A traumatic event unfolds when a girl with flowing hair of golden wheat appears in an apple orchard, where a group of people await her. A woman plays out a prostitution fantasy with her husband and finds she cannot go back to her old sex life. An ugly woman marries an ogre and struggles to decide if she should stay with him after he mistakenly eats their children. Two sisters travel deep into Malaysia, where one learns the art of mending tigers who have been ripped to shreds.

In these deeply resonant stories—evocative, funny, beautiful, and sad—we see ourselves reflected as if in a funhouse mirror. Aimee Bender has once again proven herself to be among the most imaginative, exciting, and intelligent writers of our time.