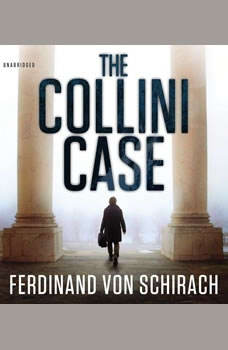 A bestseller in Germany since its 2011 release—with rights sold in seventeen countries—The Collini Case combines the classic courtroom procedural with modern European history in a legal thriller worthy of John Grisham and Scott Turow.

Fabrizio Collini is recently retired. He’s a quiet, unassuming man with no indications that he’s capable of hurting anyone. And yet he brutally murders a prominent industrialist in one of Berlin’s most exclusive hotels.

Collini ends up in the charge of Caspar Leinen, a rookie defense lawyer eager to launch his career with a not-guilty verdict. Complications soon arise when Collini admits to the murder but refuses to give his motive, much less speak to anyone. As Leinen searches for clues he discovers a personal connection to the victim and unearths a terrible truth at the heart of Germany’s legal system that stretches back to World War II. But how much is he willing to sacrifice to expose the truth?