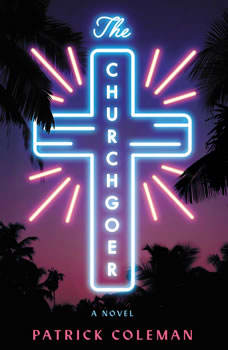 The Churchgoer: A Novel

A haunting debut literary noir about a former pastor’s search to find a missing woman in the toxic, contradictory underbelly of southern California.

“He was finished with church, with God, with all of it. But to find the girl, he has to go back.”

In Mark Haines’s former life, he was an evangelical youth pastor, a role model, and a family man—until he abandoned his wife, his daughter, and his beliefs. Now he’s marking time between sunny days surfing and dark nights working security at an industrial complex. His isolation is broken when Cindy, a charming twenty-two-year old drifter he sees hitchhiking on the Pacific Coast Highway, hustles him for a breakfast and a place to crash—two cynical kindred spirits.

Then his co-worker is murdered in a robbery gone wrong and Cindy disappears on the same night. Haines knows he should let it go and return to his safe life of solitude. Instead, he’s driven to find out where Cindy went, under stranger and stranger circumstances. Soon Mark is chasing leads, each one taking him back into a world where his old life came crashing down—into the seedier side of southern California’s drug trade and ultimately into the secrets of an Evangelical megachurch where his past and his future are about to converge. What begins as an investigation becomes a haunting mystery and a psychological journey both for Mark, and for the elusive young stranger he won’t let get away.

Set in the early 2000s, The Churchgoer is a gripping noir, a quiet subversion of the genre, and a powerful meditation on belief, morality, and the nature of evil in contemporary life.

Once Joe Kurtz needed revenge--and revenge cost him eleven years in Attica prison. Now Kurtz needs a job, and the price is going to be higher. Out of prison, out of touch, Kurtz signs on with the Byron Farino, Don of a Mob family whose son Kurtz ha...

Reteaming a decade after their award-nominated first collaboration, Bruen and Starr complete the saga of wannabe druglord Max Fisher and his one-time assistant Angela, now working in the capital of sin and depravity: Hollywood.

The International Sensation It begins in a Stockholm city park where the abused body of a young boy is discovered. Detective Superintendent Jeanette Kihlberg heads the investigation, battling an apathetic prosecutor and a bureaucratic police force u...

"My imagination is always skulking about in a wrong place." And now Doyle Redmond, thirty-five-year-old nowhere writer, has crossed the line between imagination and real live trouble. On the lam in his soon-to-be ex-wife's Volvo, he's running a fam...

A Killing Winter
by Wayne Arthurson

Wayne Arthurson drew critical acclaim from the likes of Booklist and Library Journal for Fall from Grace, his genre-bending debut featuring half-Cree, half-French Canadian reporter Leo Desroches. In this sequel, Leo poses as a homeless man for a sto...

Fuminori Nakamura's Akutagawa Prize-winner plunges us into the depths of a young man's winding, troubled psyche. An unnamed taxi driver in Tokyo has experienced a rupture in his everyday life. He cannot stop daydreaming of suicide, envisioning himse...

A Spring Betrayal
by Tom Callaghan

We uncovered the last of the bodies in the red hour before dusk, as the sun stained the snowcaps of the Tian Shan mountains the color of dried blood and the spring air turned sharp and cold . . . Inspector Akyl Borubaev of the Bishkek Murder Squad ...

A brilliant new protagonist and his memorable community are introduced in the latest masterpiece by acclaimed novelist James Sallis. In his celebrated career, James Sallis has created some of the most finely drawn protagonists in crime fiction, all...

Like the kind of cars they don't make anymore and the kind of songs they don't sing, the novels of George Pelecanos have the style, rhythm and muscle of classics. SHOEDOG is vintage Pelecanos: a tale that throbs with soul and pulsates with menace.C...