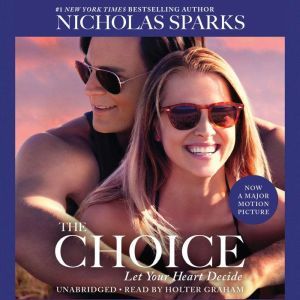 In this deeply moving #1 New York Times bestseller, Nicholas Sparks turns his unrivaled talents to a tale about love found and lost, and the choices we hope we'll never have to make.Travis Parker has everything a man could want: a good job, loyal friends, even a waterfront home in small-town North Carolina. In full pursuit of the good life - boating, swimming , and regular barbecues with his good-natured buddies -- he holds the vague conviction that a serious relationship with a woman would only cramp his style. That is, until Gabby Holland moves in next door. Spanning the eventful years of young love, marriage and family, THE CHOICE ultimately confronts us with the most heart-wrenching question of all: how far would you go to keep the hope of love alive?

Nicholas Sparks is one of my guilty pleasures. Im a hopeless romantic, and if I want the sort of love story that exists as always in fiction and rarely, if ever, in real life, intense emotions, and a good cry, all in a breezy, brisk read, he is my goto guy. With The Choice, however, the hallmarks pun intended of what makes a Nicholas Sparks book a Nicholas Sparks book, lost their charm. I found the story too contrived and too predictable, even for this author. I resented the degree to which my emotions were blatantly manipulated. The main characters actions didnt move me at all they infuriated me, particularly as the story came to its conclusion. When I finished the book, I quite literally threw it at a wall in disgust. Has Sparks lost his touch, or have my tastes simply matured? Im not sure, but I havent read another book by my onetime guilty pleasure author since this disappointment.