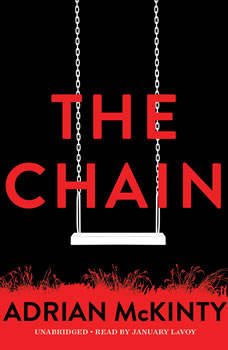 VICTIM.SURVIVOR.ABDUCTOR.CRIMINAL.YOU WILL BECOME EACH ONE."This nightmarish story is incredibly propulsive and original. You won't shake it for a long time."STEPHEN KING "McKinty is one of the most striking and most memorable crime voices to emerge on the scene in years. His plots tempt you to read at top speed, but don't give in: this writing - sharply observant, intelligent and shot through with black humor - should be savored."TANA FRENCH"A masterpiece. You have never read anything quite like THE CHAIN and you will never be able to forget it."DON WINSLOW* * * * *YOUR PHONE RINGS.A STRANGER HAS KIDNAPPED YOUR CHILD.TO FREE THEM YOU MUST ABDUCT SOMEONE ELSE'S CHILD.YOUR CHILD WILL BE RELEASED WHEN YOUR VICTIM'S PARENTS KIDNAP ANOTHER CHILD.IF ANY OF THESE THINGS DON'T HAPPEN:YOUR CHILD WILL BE KILLED.YOU ARE NOW PART OF THE CHAIN* * * * *"Diabolical, unnerving, and gives a whole new meaning to the word "relentless". Adrian McKinty just leapt to the top of my list of must-read suspense novelists. He's the real deal."DENNIS LEHANE"Pairing an irresistible concept with a winner protagonist, THE CHAIN promises to be your new addiction once you succumb to the first enticing page."ALAFAIR BURKE"A grade-A-first-rate-edge-of-your-seat thriller. I can't believe what went through my mind while reading it."ATTICA LOCKE"Diabolically gripping. Nail-biting, smart, and convincing. Hang on tight, because once you start this book, you can't stop - you'll be caught in THE CHAIN."MEG GARDINER"THE CHAIN is the rare thriller that's not only fiendishly clever but also powerfully empathetic, with both hair-raising twists and complex, fully-realized characters."LOU BERNEY"YOU ARE NOT THE FIRST.AND YOU WILL CERTAINLY NOT BE THE LAST."