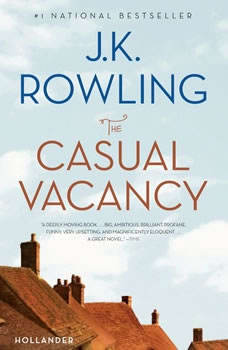 A big novel about a small town...When Barry Fairbrother dies in his early forties, the town of Pagford is left in shock.Pagford is, seemingly, an English idyll, with a cobbled market square and an ancient abbey, but what lies behind the pretty faA§ade is a town at war.Rich at war with poor, teenagers at war with their parents, wives at war with their husbands, teachers at war with their pupils...Pagford is not what it first seems.And the empty seat left by Barry on the parish council soon becomes the catalyst for the biggest war the town has yet seen. Who will triumph in an election fraught with passion, duplicity, and unexpected revelations?A big novel about a small town, The Casual Vacancy is J.K. Rowling's first novel for adults. It is the work of a storyteller like no other.

Jo-Anne "Jo" Rowling, a British novelist, is best known for her novels of fantasy series, Harry Potter. In selling more than 400 million copies, worldwide, they have become one of the most famous and best-selling book series in history. The books were adapted to film, and became some of the highest grossing films in history. Rowling served as Producer on the final installment film.

With all the accolades, awards, and record breaking numbers, it is almost comical that such a series was conceived while she was sitting on a delayed train trip from Manchester to London in 1990. During the seven year period after that writing, Rowling's Mother passed away, and she and her first husband were divorced. She actually lived in relative poverty until the publishing in 1997 of Harry Potter and the Philosopher's Stone. She literally went from "rags to riches" almost overnight. She was rated the twelfth richest woman in the United Kingdom in 2008, and Forbes ranked her as the 48th most powerful celebrity of 2007. She has been awarded just about every literary and financial success award that there is.

She became J. K. Rowling's when it occurred to her that young boys might not be so anxious to read a novel written by Joanne Rowling’s. Her publishers asked that she use her two initials rather than her whole name for that reason. Who's Who lists her name as Joanne Kathleen Rowling.

It is rather interesting to note that such a phenomenally successful author and person once saw herself as a total failure. Her marriage had failed, she was unemployed with sole responsibility for a child, but even then, she used the failure to be liberating, allowing her to concentrate on her writing. She was even diagnosed with depression and considered suicide, but her illness ended up being the inspiration for her characters known as Dementors, "soul-sucking creatures" which appeared in the third book of the series.

Maybe one of the best legacies she can claim is that the Harry Potter books sparked interest in reading among young people at a time when they were thought to be abandoning books for computers and television.

As many reviewers note, this is nothing like Harry Potter. Thats fine, she warned us about that long ago. Unfortunately, taken as something completely separate, it is still lacking. It is impossible to deny that she brought to life a large cast of very complex, very real characters. Unfortunately, thats all she did. Characters are all unlikable and gossipy. The plot lags for many portions, then when she does seem to be building to a climax the book just ends with carnage. Its a very depressing and abrupt ending that left me feeling very annoyed and disappointed in my favorite writer.

Dont bother with this book. It is full of unsympathetic characters leading uninspiring, spiteful lives who are content to stab anyone in the back and possibly the front. I persevered to the end and then wondered why I had wasted my time. A friend of mine began the book at about the same time and didnt even get a quarter of the way through before giving up. If you want Rowling, reread Harry Potter.