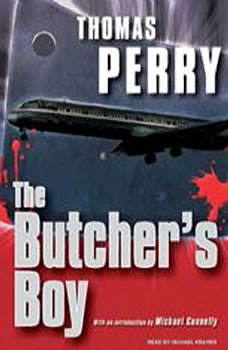 Murder has always been easy for the Butcher's Boy—it's what he does best and what they pay him for. But after the successful assassination of a senator, he arrives in Las Vegas to collect his fee only to discover he has become a liability to his shadowy employers. His survival at stake, he needs to kill them before they kill him. But first he needs to find out who they are. As the Butcher's Boy goes to work, police specialists watching the world of organized crime realize something has gone very wrong for the mafia. In the race to discover just what that something is, Elizabeth Waring, a bright young analyst in the Justice Department, is the best chance they have. But is she good enough to catch the Butcher's Boy?

Prince of Fire
by Daniel Silva

Few recent thriller writers have elicited the kind of critical praise that Daniel Silva has received, with his “provocative and deeply satisfying” (The Miami Herald) novels featuring art restorer and sometime spy Gabriel Allon, “a ...

He came to England to rest. He calls himself Michael Shaeffer, says he's a retired American businessman. He goes to the races, dates a kinky aristocrat, and sleeps with dozens of weapons. Ten years ago it was different. Then, he was the Butcher's Bo...

The Gold Coast
by Nelson DeMille

Welcome to the fabled Gold Coast, that stretch on the North Shore of Long Island that once held the greatest concentration of wealth and power in America. Here two men are destined for an explosive collision: John Sutter, Wall Street lawyer, holdin...

Available for the first time Unabridged on CD in an all-new recording by Scott Brick, the first of the blockbuster thrillers by New York Times bestselling author David Baldacci. The book that will change the way you think about Washington - and pow...

State of Fear
by Michael Crichton

In Paris, a physicist dies after performing a laboratory experiment for a beautiful visitor. In the jungles of Malaysia, a mysterious buyer purchases deadly cavitation technology, built to his specifications.In Vancouver, a small research submarine ...

CIA superagent Mitch Rapp battles global terrorism in a high-octane follow-up to the New York Times bestseller Separation of Power -- another chillingly authentic adventure from the master of the political thriller. Mitch Rapp's cover has been blow...