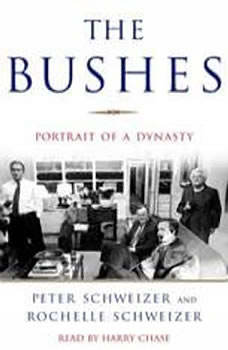 The Bushes: Portrait of a Dynasty

Get the inside story on America’s most powerful political dynasty.


President George W. Bush leads our nation in a time of unprecedented peril. But how well do we really know him or his remarkable family, whose history often mirrors the history of America? Now, in the first full-scale biography of the Bushes, Peter and Rochelle Schweizer trace the extraordinary trajectory of their rise to power.

Through a series of exclusive, surprisingly candid interviews with members of the family and close friends, the inner workings of this very private family are revealed: their marriages and friendships; the intense sibling rivalry between George W. and Jeb Bush; divisions between father and son over the Iraq war; even Jeb Bush’s plans to run for president in 2008. Never-before-seen private photos add even greater detail and depth to this fascinating family portrait.

And above all, we see George W. Bush the way his family does, as an intensely driven person who has a much more complex relationship with his father than has often been portrayed in the media. Family members talk about how he deals with the stresses of the war on terrorism, why he sees it as a “religious war,” and how his personal faith influences what he says and does.

The Schweizers also delve into the Bushes’ sensitive and secret business dealings, including their long history of involvement in the oil business. Their shrewd alliances with other American dynasties—including the Kennedys, Rockefellers, and Tafts—have all helped to quietly consolidate their power within the Republican Party.
Indeed, what makes the Bushes so successful is that they function less like the great political families before them and more like a high-tech startup: free-flowing, pragmatic, and opportunistic. It is this distinction that assures them an enduring presence on the nation’s political stage, making The Bushes essential reading for anyone who cares about America’s future.