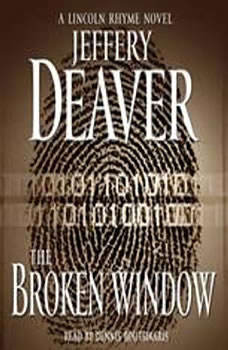 Bestselling master of suspense Jeffery Deaver is back with a brand-new Lincoln Rhyme thriller. Lincoln Rhyme and partner/paramour Amelia Sachs return to face a criminal whose ingenious staging of crimes is enabled by a terrifying access to information.... When Lincoln's estranged cousin Arthur Rhyme is arrested on murder charges, the case is perfect -- too perfect. Forensic evidence from Arthur's home is found all over the scene of the crime, and it looks like the fate of Lincoln's relative is sealed. At the behest of Arthur's wife, Judy, Lincoln grudgingly agrees to investigate the case. Soon Lincoln and Amelia uncover a string of similar murders and rapes with perpetrators claiming innocence and ignorance -- despite ironclad evidence at the scenes of the crime. Rhyme's team realizes this "perfect" evidence may actually be the result of masterful identity theft and manipulation. An information service company -- the huge data miner Strategic Systems Datacorp -- seems to have all the answers but is reluctant to help the police. Still, Rhyme and Sachs and their assembled team begin uncovering a chilling pattern of vicious crimes and coverups, and their investigation points to one master criminal, whom they dub "522." When "522" learns the identities of the crime-fighting team, the hunters become the hunted. Full of Deaver's trademark plot twists, The Broken Window will put the partnership of Lincoln Rhyme and Amelia Sachs to the ultimate test.