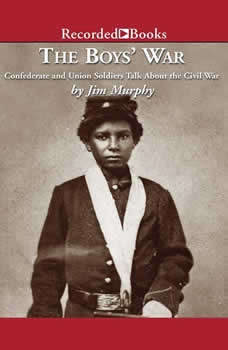 The Boys' War: Confederate and Union Soldiers Talk About the Civil War

We all know about the famous generals and the major battles of the Civil War. But for the soldiers who actually fought, the war was all too real. It was especially traumatic for the thousands of soldiers who ranged in age from 10 to 15. Some young soldiers joined the fray to escape the boredom of farm work or to "set the South straight." Many of them kept diaries and wrote letters home. Through their eyes, we see what life was like on the edge of chaos. Some of their writing describes the gruesome details of forced marches and deaths on the battlefield. Balanced with anecdotes of practical jokes they played on one another and interesting people they met, their stories touch our minds and hearts. Ed Sala's interpretation of this well-documented history brings the Civil War to life in a way that few historians could. These everyday details of the war, told in the straightforward language of the young, provide a moving, unforgettable history lesson.