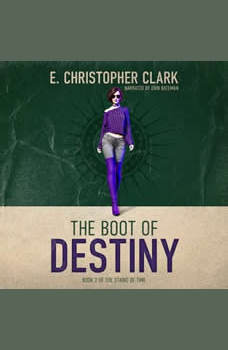 The Boot of Destiny

Series: The Stains of Time

She loved him as a father. When he breaks her heart, she’ll raise his darkest specters…

High-school valedictorian Tracy Silver embraced her uncle as the dad she never had. But her perfect image of him shattered when she caught him with a stripper. Now he’s back in town, and she’s determined to render justice with a magical potion.

With the supernatural elixir running through the man’s veins, Tracy presents his memories as evidence in a mystical courtroom. But though she defies him to confirm he’s not like every other man, her righteousness is shaken with the revelation of his dark and shocking secrets.

Can Tracy prove her uncle’s betrayal was real, or will she uncover a deeper truth?

The Boot of Destiny is the second book in the intriguing Stains of Time family saga series. If you like nuanced characters, deep moral quandaries, and a touch of metaphysical mystery, then you’ll love E. Christopher Clark’s coming-of-age tale.

Buy The Boot of Destiny to rewind the facts today!