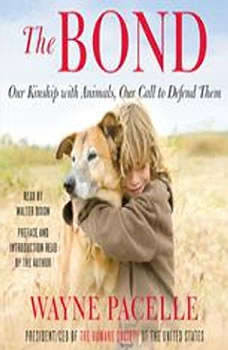 The Bond: Protecting the Special Relationship Between Animals and Humans

“If the animals knew about this book they would, without doubt, confer on Wayne Pacelle, their highest honor.”—Jane Goodall“The Bond is the best overall book on animals I have ever read. Brilliant and moving.”—John Mackey, CEO and Co-founder of Whole Foods Market“The Bond is at once heart-breaking and heart-warming. No animal escapes Wayne Pacelle’s attention; nor should his book escape any human animal’s attention.”—Alexandra Horowitz, New York Times Bestselling Author of Inside of a Dog The president and CEO of the Humane Society of the United States, the world’s largest animal protection organization, Wayne Pacelle brings us The Bond, a heartfelt, eye-opening exploration of the special bond between animals and humans. With the poignant insight of Animals Make Us Human and the shocking reality of Fast Food Nation—filled with history, valuable insights, and fascinating stories of the author’s experience in the field—The Bond is an important investigation into all the ways we can repair our broken bond with the animal kingdom and a thrilling chronicle of one man’s extraordinary contribution to that effort.

The Humane Economy
by Wayne Pacelle