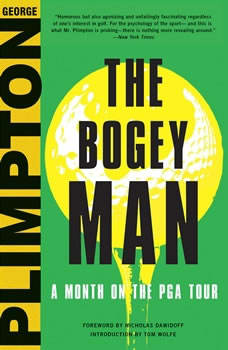 The Bogey Man: A Month on the PGA Tour

George Plimpton chronicles his month spent on the PGA tour in THE BOGEY MAN, now repackaged and including a foreword by Rick Reilly and never-before-seen content from the Plimpton Archives.What happens when a weekend athlete--of average skill at best--joins the professional golf circuit? George Plimpton, one of the finest participatory sports journalists, spent a month of self-imposed torture on the tour to find out. Along the way, he meets amateurs, pros, caddies, officials, fans, and hangers-on. In THE BOGEY MAN, we find golf legends, adventurers, stroke-saving theories, superstitions, and other golfing lore, and best of all, Plimpton's thoughts and experiences--frustrating, humbling and, sometimes, thrilling--from the first tee to the last green. This intriguing classic, which remains one of the wittiest books ever written on golf, features Arnold Palmer, Dow Finsterwald, Walter Hagan, and many other golf greats and eccentrics, all doing what they do best.