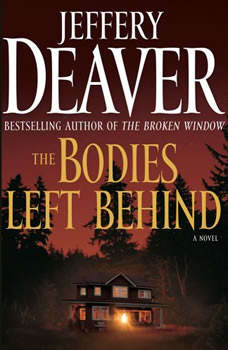 The Bodies Left Behind

The New York Times bestselling master of suspense is back! When a night-time call to 911 from a secluded Wisconsin vacation house is cut short, off-duty deputy Brynn McKenzie leaves her husband and son at the dinner table and drives up to Lake Mondac to investigate. Was it a misdial or an aborted crime report? Brynn stumbles onto a scene of true horror and narrowly escapes from two professional criminals. She and a terrified visitor to the weekend house, Michelle, flee into the woods in a race for their lives. As different as night and day, and stripped of modern-day resources, Brynn, a tough deputy with a difficult past, and Michelle, a pampered city girl, must overcome their natural reluctance to trust each other and learn to use their wits and courage to survive the relentless pursuit. The deputy's disappearance spurs both her troubled son and her new husband to action, while the incident sets in motion Brynn's loyal fellow deputies and elements from Milwaukee's underside. These various forces race along inexorably toward the novel's gritty and stunning conclusion. The Bodies Left Behind is an epic cat-and-mouse chase, told nearly in real-time, and is filled with Deaver's patented twists and turns, where nothing is what it seems, and death lingers just around the next curve on a deserted path deep in the midnight forest.

I have never in my life used the word Cluster^^^^ but this book is one for sure! I can't believe that he wrote this rubbish. It will make me think twice before I read another of his books, I have always enjoyed them up till this one. I almost didn't finish it...and that is NOT like me at all. I DO NOT recommend this book. Too many characters...to many plots....too many bad guys....too many good guys....maybe....LOL....Not a book high on my list...and to think that I went out and bought this book while waiting for my Booksfree shipment ! What a waste !

Never read his work before. I ran out of the norm for me and needed something to read. Boy what a joke! To many people involved in this story. Had to back track to remember who was who. All thru the book it was the same and the setting wasn't even real. In the dense forest at night with no moon and you could see what a person was doing or holding at 300 yards? Not a well thought out plot really. But I do have to give a point because of the twist to the story. It was dragged out to much and the same thing over and over again trying to made the bad guy and the good guy seem the same in their thinking.