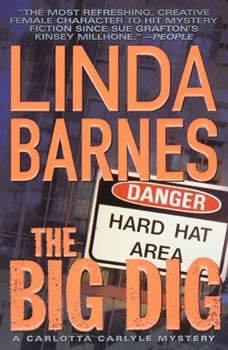 Carlotta Carlyle, the six-foot-tall redhead private investigator, thought that working undercover searching out fraud on Boston's Big Dig would be a challenging assignment. After all, the Big Dig, the creation of a central artery highway through downtown Boston, is a 14 billion dollar boondoggle, the largest urban construction project in modern history. But playing a mild-mannered secretary working out of a construction trailer is not quite the thrill ride she had in mind, so Carlotta starts moonlighting, taking on a missing persons case. The search for the missing Veronica James turns up one dead end after another, as do her fraud investigations, and it looks like Carlotta has dug herself one big hole. But the mysterious death of a construction worker stirs up a storm of events, and soon enough Carlotta is really in over her head, grasping at the edges of a vast conspiracy that threatens to make this investigation her last.