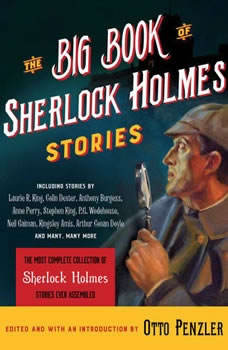 Arguably no other character in history has been so enduringly popular as Sherlock Holmes. From his first appearance, in Arthur Conan Doyle's 1887 novella A Study in Scarlet, readers have loved reading about him—and writers have loved writing about him. Here, Otto Penzler collects 75 wonderful stories about Holmes and Dr. John Watson, the majority of which will be new to readers. Among these pages are tales by acclaimed Sherlockians Leslie S. Klinger, Laurie R. King, Lyndsay Faye and Daniel Stashower; pastiches by literary luminaries both classic (Kenneth Millar, P. G. Wodehouse, Dorothy B. Hughes) and current (Anne Perry, Neil Gaiman); and parodies by Conan Doyle's contemporaries James M. Barrie, O. Henry, and August Derleth.

Launched with the summer '04 award-winning best seller Brooklyn Noir, Akashic Books has published over sixty volumes in its groundbreaking series of original noir anthologies. Each book is comprised of all-new stories, each one set in a distinct nei...