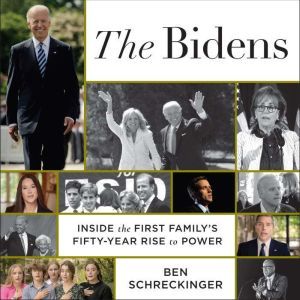 The Bidens: Inside the First Family's Fifty-Year Rise to Power

A deeply reported exploration of Joe Biden as told through his extended family.

Coming off of the 2020 election, THE BIDENS tells the Biden Family story in full, from the secrets lurking in the deep recesses of Joe's family tree to his son Hunter's foreign deal-making spree—and the Trump gang's ham-handed efforts to exploit it.

​On November 3, Americans did not just elect Joe Biden: They got a package deal. The tight-knit Biden family—siblings, children, in-laws, and beyond—is coming right along with him. They are sure to play a defining role in his presidency, just as they have in every other one of his endeavors.
Inside, you’ll find these and other stories and revelations about the Biden family, including:Joe’s childhood, the stunning 1972 Senate upset engineered by his sister Valerie, and the car accident that took the lives of his first wife and infant daughter soon afterJoe’s early years in the Senate and his role in the creation of the cozy “Delaware Way” of conducting politicsThe Biden brothers’ business escapades, including the ’70s rock club rivalry that pitted Jim Biden against Jill’s first husband and ended in a banking scandalThe Delaware lawman who oversaw an FBI investigation into Joe’s 2007 campaign fundraising and now has Hunter in his sightsHunter’s surprisingly close friendship with his Fox News antagonist, Tucker CarlsonWhat Steve Bannon really hoped to accomplish by giving the contents of “the Laptop from Hell” to the New York PostNew evidence that sheds light on the authenticity of Hunter’s alleged computer filesLike the Kennedys before them, the Bidens are a tight-knit, idealistic Irish Catholic clan with good looks, dynastic ambitions, and serious personal problems.

As THE BIDENS reveals, the best way to understand Joe Biden—his values, fears, and motives—is to understand his family: Their Irish (and not-so-Irish) roots, their place in the Delaware pecking order, their dodgy business deals, and their personal struggles and triumphs alike.
Recommended