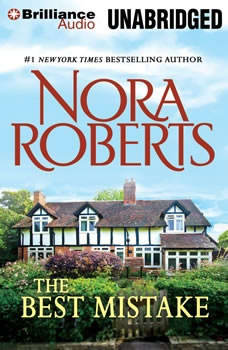 The Best Mistake: A Selection from Love Comes Along

From #1 New York Times bestselling author Nora Roberts comes a classic tale about finding the man of your dreams right under your nose.Ex-model Zoe Fleming is now a hardworking single mom—and she wouldn’t have it any other way. Though she would like a tenant to share household expenses. What she gets is confirmed bachelor J. Cooper McKinnon. Coop quickly befriends her son and in no time has the reluctant Zoe charmed, too. But she has zero room in her life for a man! Either this was a recipe for disaster or the best mistake she’s ever made.

Bay of Sighs
by Nora Roberts

As the Guardians Trilogy from #1 New York Times bestselling author Nora Roberts moves to the island of Capri, a mermaid and a traveler discover the power of timeless love…To celebrate the rise of their new queen, three goddesses of the moon cr...