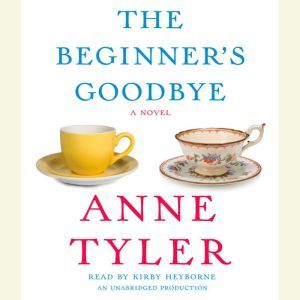 Anne Tyler gives us a wise, haunting, and deeply moving new novel in which she explores how a middle-aged man, ripped apart by the death of his wife, is gradually restored by her frequent appearances—in their house, on the roadway, in the market.

Crippled in his right arm and leg, Aaron spent his childhood fending off a sister who wants to manage him. So when he meets Dorothy, a plain, outspoken, self-dependent young woman, she is like a breath of fresh air. Unhesitatingly he marries her, and they have a relatively happy, unremarkable marriage. But when a tree crashes into their house and Dorothy is killed, Aaron feels as though he has been erased forever. Only Dorothy’s unexpected appearances from the dead help him to live in the moment and to find some peace.

Gradually he discovers, as he works in the family’s vanity-publishing business, turning out titles that presume to guide beginners through the trials of life, that maybe for this beginner there is a way of saying goodbye.

A beautiful, subtle exploration of loss and recovery, pierced throughout with Anne Tyler’s humor, wisdom, and always penetrating look at human foibles.

As usual the characters are quirky and endearing. I love this book like I love most of hers. I dont much care what the plot is in Anne Tylers stories I just want to be there with them ~ so calm, peaceful, loving and striving always to become better at this thing we call living. If you follow this author you will not be disappointed.

Didnt know what to expect from this book, having never read any book by Anne Tyler. I was really happy I picked up this book. A very interesting story, I got very caught up in the people in the story. I am now on a quest to read Ms Tylers previous books. Really like her style!