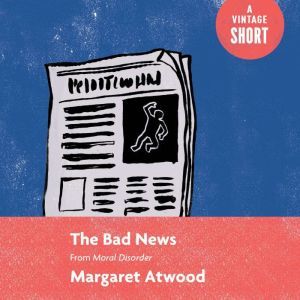 The Bad News: From Moral Disorder

“We don’t like bad news, but we need it. We need to know about it in case it’s coming our way.” This delicious, contemptuous and poignant micro-story is the first in the acclaimed collection, Moral Disorder, from towering author and #1 New York Times Bestseller, Margaret Atwood.            The bad news arrives in the form of a paper, which Tig carries up the stairs to Nell who is wallowing in bed. A year from now, they won’t remember the details, but for now, the bad news sits between the aging couple as they prepare their breakfast together and Nell imagines them in Southern France as the barbarians invade Rome on what is beautiful day, safe and quiet, for now, from the bad news coming their way.