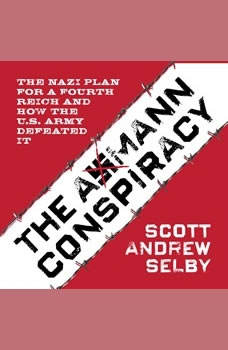 the Axmann Conspiracy: The Nazi Plan for a Fourth Reich and How the U.S. Army Defeated It

A trusted member of Hitler's inner circle, Artur Axmann, the head of the Hitler Youth, witnessed the Fuhrer commit suicide in Berlin-but he would not let the Reich die with its leader. Evading capture, and with access to remnants of the regime's wealth, Axmann had enough followers to reestablish the Nazi party in the very heart of Allied-occupied Germany-and position himself to become dictator of the Fourth Reich. U.S. Army Counter Intelligence Corps Officer Jack Hunter was the perfect undercover operative. Fluent in German, he posed as a black marketeer to root out Nazi sympathizers and saboteurs after the war, and along with other CIC agents uncovered the extent of Axmann's conspiracy. It threatened to bring the Nazis back into power-and the task fell to Hunter and his team to stop it. The Axmann Conspiracy is the previously untold true story of the Nazi threat that continued in the wake of World War II, the espionage that defeated it, and two fascinating men whose lives forever altered the course of history.