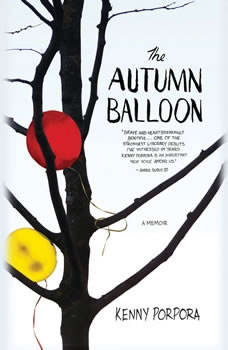 Every autumn, Kenny Porpora would watch his heartbroken mother scribble messages on balloons and release them into the sky above Long Island, one for each family member they'd lost to addiction. As the number of balloons grew, his mother fell deeper into alcoholism, drinking away her sorrows every night in front of the television, where her love of Regis Philbin provided a respite from the sadness around her. When their house was foreclosed upon, Kenny's mother absconded with him and his beloved dog and fled for the Arizona desert, joining her heroin-addicted brother on a quixotic search for a better life. What followed was an outlaw adolescence spent in constant upheaval surrounded by bizarre characters and drug-addicted souls.In the wake of unspeakable loss, Kenny convinced a college to take a chance on him, and turned to the mentors, writers, and poets he found to rebuild the family he lost, and eventually graduated from the Ivy League with a new life.Porpora's memoir is the story of a deeply dysfunctional but loving family, and follows his life from the chaos of his youth to his triumphs in the Ivy League. At times darkly comic, at times elegiac, The Autumn Balloon is a beautifully written testament to the irreplaceable bonds of family, even under the most trying circumstances, and one that marks the debut of an exciting new writer.