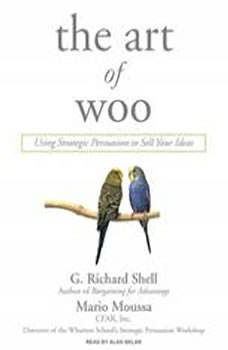 The Art of Woo: Using Strategic Persuasion to Sell Your Ideas

Your projects, programs, and career turn on the difference between "no" and "yes." Yet selling ideas—especially the kinds of ideas that make organizations work—is a skill shrouded in mystery. Part emotional intelligence, part politics, part rhetoric, and part psychology, selling ideas is not like tricking someone out of his money. It's about helping others to see things your way—engaging their minds and imaginations. Charles Lindbergh, for example, needed woo to assemble backers for his famous flight. Nelson Mandela also used it to lead a revolution in South Africa. In any context, woo is two parts art and one part science. In The Art of Woo, Professors G. Richard Shell and Mario Moussa offer a self-assessment to determine which persuasion role fits you best and how to make the most of your natural strengths. They also share vivid stories from their experiences advising thousands of leaders and stories about famous people like John D. Rockefeller, Andrew Carnegie, Andy Grove, and Bono. Whether you're introverted or extroverted, competitive or collaborative, intellectual or practical, The Art of Woo will strengthen your persuasion skill in every aspect of your life.