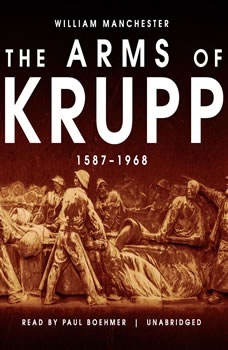 In this narrative of extraordinary richness, depth, and authority, Americas preeminent biographer/historian explored the German national character as no other writer has done. The Arms of Krupp brings to life Europes wealthiest, most powerful family, a four-hundred-year German dynasty that developed the worlds most technologically advanced weapons, from cannons to submarines to anti-aircraft guns; provided arms to generations of German leaders, including the kaiser and Hitler; operated private concentration camps during the Nazi era; survived conviction at Nuremberg; and wielded enormous influence on the course of world events. William Manchesters galvanizing account of the rise and fall of the Krupp dynasty is history as it should be writtenalive with all its terrifying power.

A trusted member of Hitler's inner circle, Artur Axmann, the head of the Hitler Youth, witnessed the Fuhrer commit suicide in Berlin-but he would not let the Reich die with its leader. Evading capture, and with access to remnants of the regime's wea...

The dark story of Adolf Hitler's life in 1924--the year that made a monsterBefore Adolf Hitler's rise to power in Germany, there was 1924. This was the year of Hitler's final transformation into the self-proclaimed savior and infallible leader who ...

The final volume in Richard J. Evans's masterly trilogy on the history of Nazi Germany traces the rise and fall of German military might, the mobilization of a "people's community" to serve a war of conquest, and Hitler's campaign of racial subjugat...

February 26, 1924 was the first day of the greatly anticipated high treason trial that would galvanize Germany - but few in the courtroom that morning anticipated that the leading defendant, General Erich Ludendorff, whose risky offensives during Wo...

Since its publication in 1960, William L. Shirers monumental study of Hitler's German empire has been widely acclaimed as the definitive record of the twentieth century's blackest hours. The Rise and Fall of the Third Reich offers an unparalleled an...

As the Nazi war machine caused death and destruction throughout Europe, one man in the Fatherland began his own reign of terror. This is the true story of the pursuit and capture of a serial killer in the heart of the Third Reich. For all appeara...

"[Narrator Steven Crossley's] British accent gives his narration an academic-sounding quality fitting for the text. He is clear and precise in pronunciation and enunciation and is suitably expressive throughout." — AudioFile MagazineThe Death ...

Obscure and addictive true tales from history told by one of our most entertaining historians, Giles MiltonThis program is read by the author, the host of the popular podcast, Unknown History with Giles Milton. The first installment in Giles Milton'...

In the aftermath of World War II, Prussia—a centuries-old state pivotal to Europe's development—ceased to exist. In their eagerness to erase all traces of the Third Reich from the earth, the Allies believed that Prussia, the very embodim...