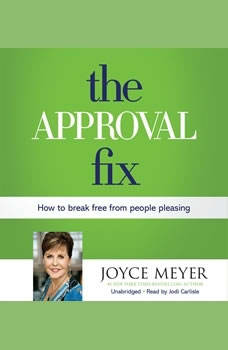 The Approval Fix: How to Break Free from People Pleasing

Everybody wants to be loved. We all need affirmation, acceptance, and approval. Let's face it: It feels good to be appreciated and admired. But when we depend on the approval of others to feel good about ourselves, it's impossible to have emotional stability or a healthy self-image. And when our value is based on how people see us rather than God's unconditional love for us, our desire for approval can become an addiction. In THE APPROVAL FIX, #1 New York Times bestselling author Joyce Meyer gives you practical insights that will help you learn how to accept who you are and become the unique individual God created you to be. You'll experience greater confidence, deeper emotional stability, and healthier relationships-the life you're really longing for. Today, discover the truth about God's love for you and approval of you. And enjoy the freedom to be the amazing person you can be in Him! Derived from material previously published in Approval Addiction.

Living a Life You Love
by Joyce Meyer

No Limits
by John C. Maxwell