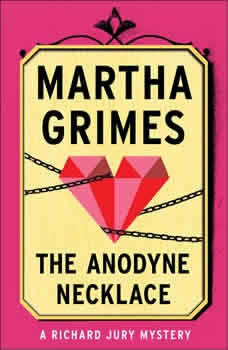 The third in the bestselling Richard Jury mystery series by Martha Grimes.A spinster whose passion was bird-watching, a dotty peer who pinched pennies, and a baffling murder made the tiny village of Littlebourne a most extraordinary place. And a severed finger made a ghastly clue in the killing that led local constables from a corpse to a boggy footpath to a beautiful lady’s mansion. But Richard Jury refused preferring to take the less traveled route to a slightly disreputable pub, the Anodyne Necklace. There, drinks all around loosened enough tongues to link a London mugging with the Littlebourne murder and a treasure map that would chart the way to yet another chilling crime.

The Dirty Duck
by Martha Grimes

The Dirty Duck is a pub in Shakespeare’s beloved Stratford, and in this pub Miss Gwendolyn Bracegirdle of Sarasota, Florida, fresh from a performance of As You Like It, takes her last drink. A few minutes later she is slashed ear to ear, the o...

From the rough but colorful pub that provides the novel’s title, to the snowboard Gothic estate nearby, the chilly English landscape has never held more atmosphere-or thwarted romance. And Jury will never have a more mysterious Christmas. Five...

The Deer Leap
by Martha Grimes

In this Richard Jury adventure, Martha Grimes takes listeners to Ashdown Dean, a little English village where animals are dying in a series of seemingly innocuous accidents. While the puzzling deaths of village pets may raise some idle gos...

The Murder Book
by Jonathan Kellerman

Jonathan Kellerman has distinguished himself as the master of the psychological thriller. Now L.A. psychologist-detective Alex Delaware confronts a long-unsolved murder of unspeakable brutality—an ice-cold case whose resolution threatens h...