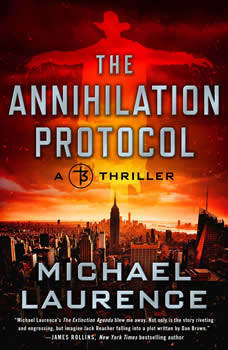 Michael Laurence delivers The Annihilation Protocol, the follow-up to The Extinction Agenda, in a series described as “Jack Reacher falling into a plot written by Dan Brown” (James Rollins, #1 New York Times bestselling author of Crucible).

For centuries, a mysterious syndicate known as the Thirteen has staged a silent coup, infiltrating governments and manipulating the course of world events. It’s more powerful than any nation, deadlier than any army. The time has come for it to emerge from the shadows and claim the entire world as its own. And only FBI Special Agent James Mason and his longtime friends stand in its way.

After narrowly preventing a global pandemic, Mason and his team discover an even deadlier threat has already been set into motion. An unknown adversary has produced enough of a lethal nerve gas to wipe every major city off the face of the world, and their only clue to finding it lies in a cryptic message written in the blood of a man found entombed behind a concrete wall. It isn’t until another victim appears—right in the heart of Central Park—that Mason realizes the murders are personal in nature, and figuring out the connection between them is the key to averting catastrophe.

Eight million lives hang in the balance and their only chance of surviving lies in the hands of Mason, his old friends, and a new partner he’s not entirely sure he can trust. Can his team track down a sinister agent codenamed Scarecrow before toxic gas fills the streets of New York City, or will the true power pulling the strings from behind the scenes—the Thirteen—succeed in enacting its genocidal agenda?