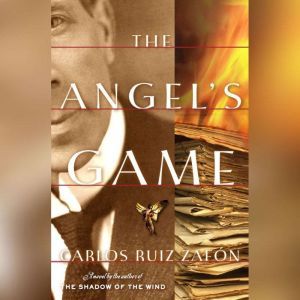 From master storyteller Carlos Ruiz Zafón, author of the international phenomenon The Shadow of the Wind, comes The Angel’s Game—a dazzling new page-turner about the perilous nature of obsession, in literature and in love.

“The whole of Barcelona stretched out at my feet and I wanted to believe that, when I opened those windows, its streets would whisper stories to me, secrets I could capture on paper and narrate to whomever cared to listen . . .”

In an abandoned mansion at the heart of Barcelona, a young man, David Martín, makes his living by writing sensationalist novels under a pseudonym. The survivor of a troubled childhood, he has taken refuge in the world of books and spends his nights spinning baroque tales about the city’s underworld. But perhaps his dark imaginings are not as strange as they seem, for in a locked room deep within the house lie photographs and letters hinting at the mysterious death of the previous owner.

Like a slow poison, the history of the place seeps into his bones as he struggles with an impossible love. Close to despair, David receives a letter from a reclusive French editor, Andreas Corelli, who makes him the offer of a lifetime. He is to write a book unlike anything that has ever existed—a book with the power to change hearts and minds. In return, he will receive a fortune, and perhaps more. But as David begins the work, he realizes that there is a connection between his haunting book and the shadows that surround his home.
Once again, Zafón takes us into a dark, gothic universe first seen in the Shadow of the Wind and creates a breathtaking adventure of intrigue, romance, and tragedy. Through a dizzingly constructed labyrinth of secrets, the magic of books, passion, and friendship blend into a masterful story.

What a Wonderful book! It is a darker, and perhaps more profound novel, than Shadow Of The Wind, but is recognizably by the same author. The main theme of the book is that of a Faustian deal made by a poor but extremely ambitious young man who, while not believing in the existence of souls is perfectly willing to sell his own for literary and monetary success. What makes the novel so compelling is that even the minor characters seem to come alive under Mr. Ruiz Zafon's riveting style as translated into English by Lucia Graves who--if I'm not mistaken--is the daughter of the poet, Robert Graves.If you like fine literature with more than a touch of magic realism, do read this book. You will be in for a treat.