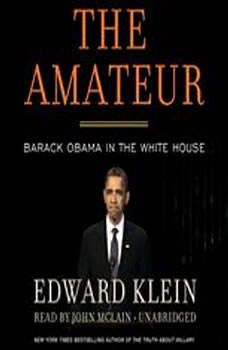 The Amateur: Barack Obama in the White House

Its amateur hour at the White House. So saysNew York Timesbestselling author Edward Klein in his political exposThe Amateur. Tapping into the publics growing sentiment that President Obama is in over his head,The Amateurargues that Obamas toxic combination of incompetence and arrogance has run our nation and his presidency off the rails. Obama was both completely inexperienced and ideologically far to the left of most Americans when he entered the White House, says Klein. And he was so arrogant that he didnt even know what he didnt know. Klein, who is known for getting the inside scoop on everyone from the Kennedys to the Clintons, reveals never-before-published details about the Obama administrations political inner workings, as well as Barack and Michelles personal lives, including the inordinate influence Michelle wields over Barack and her feud with a high-profile celebrity; therealreason Rahm Emanuel left the White House (it wasnt for family reasons); why Valerie Jarretts role is closer to that of Rasputin than impartial senior advisor; how Obama has purposefully forgotten and ignored those who put him in power, including the Kennedys and the Jewish and African American communities in Chicago. From Obamas conceited and detached demeanor, to his detrimental reliance on Michelle Obama and Valerie Jarretts advice, to the Obamas extravagant and out-of-touch lifestyle,The Amateurreveals a president whose ignorance and incompetence are sabotaging himself, his presidency, and America.

Dinesh D’Souza, author of the #1 New York Times bestseller America, is back with this darkly entertaining deconstruction of Hillary Clinton’s flawed character and ideology. From her Alinskyite past to her hopes for America’s progre...

Fascism: A Warning
by Madeleine Albright

From one of the most admired international leaders, comes a timely, considered, and personal look at the history and current resurgence of fascism today and the virulent threat it poses to international freedom, prosperity, and peace.At the end of ...