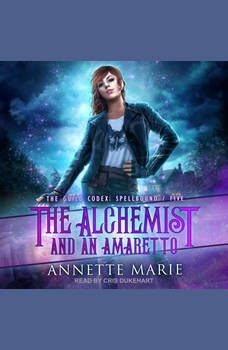 The Alchemist and an Amaretto

As a guild bartender, I can handle pretty much anything-mages, sorcerers, witches, the occasional demon. But show me anything family-related and I'd rather run for the hills. It doesn't even have to be my family. So I have no idea why I thought spending the holidays with Aaron's mom and pop was a good idea. Meeting his famous parents is already terrifying enough, but I've got a bigger problem. Students of his family's renowned mage academy are being attacked on the grounds-and somehow no one has seen a single assailant? Unexplained tracks litter the nearby woods, rumors of forbidden alchemy are circulating the campus . . . and Ezra has been acting strangely since we arrived. Something deadly is brewing in the shadow of Sinclair Academy, and the longer we take to uncover it, the more dangerous it becomes. But no matter the risk, we'll protect the students. And Aaron's parents too, I suppose. If we have to.

Hunting Fiends for the Ill-Equipped
by Annette Marie

It Devours!
by Joseph Fink

Lost Talismans and a Tequila
by Annette Marie

Druid Vices and a Vodka
by Annette Marie

The Everything Box
by Richard Kadrey

Get 5% off your total order by adding 3 or more audiobooks from The Guild Codex: Spellbound

The Alchemist and an Amaretto
The Guild Codex: Spellbound #5

Three Mages and a Margarita
The Guild Codex: Spellbound #1

Dark Arts and a Daiquiri
The Guild Codex: Spellbound #2