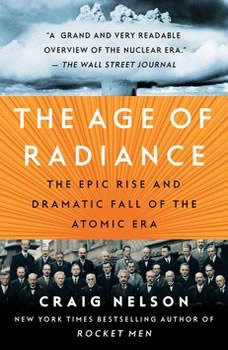 The Age of Radiance: The Epic Rise and Dramatic Fall of the Atomic Era

The Age of Radiance is the first full history of the Atomic Age, from x-rays and Marie Curie to Los Alamos, Hiroshima, Mutual Assured Destruction, Dr. Strangelove, the Nevada Test Site, and the 2011 meltdown in Japan. By the prizewinning and bestselling author of Rocket Men it reveals the little-known details of a period you thought you knew and the human drama behind the headlines: How Jewish refugees, fleeing Hitler, transformed America from a country that created light bulbs and telephones, into one that split atoms. How a Polish girl grew up to become an international hero, yet her daughter, whose work was just as significant, remained almost completely hidden in her shadows. How a president fell so in love with a cotton-candy dream he destroyed what would have been his greatest legacy. How the most grotesque weapon ever invented by mankind could realize Alfred Nobel's lifelong dream and win his Peace Prize. How German scientists needing to secure their eminence after the Nazis' defeat denied a great scientist her due, and wrote her out of history. How emergency workers and low-level utility employees fought to contain a run-amok nuclear reactor, while wondering if they would live or die.