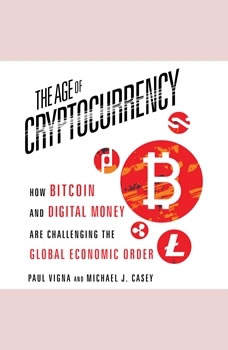 The Age of Cryptocurrency: How Bitcoin and Digital Money Are Challenging the Global Economic Order

Bitcoin became a buzzword overnight. A cyber-enigma with an enthusiastic following, it pops up in headlines and fuels endless media debate. You can apparently use it to buy anything from coffee to cars, yet few people seem to truly understand what it is. This raises the question: Why should anyone care about bitcoin? In The Age of Cryptocurrency, Wall Street journalists Paul Vigna and Michael J. Casey deliver the definitive answer to this question. Cybermoney is poised to launch a revolution, one that could reinvent traditional financial and social structures while bringing the world's billions of "unbanked" individuals into a new global economy. Cryptocurrency holds the promise of a financial system without a middleman, one owned by the people who use it and one safeguarded from the devastation of a 2008-type crash. But bitcoin, the most famous of the cybermonies, carries a reputation for instability, wild fluctuation, and illicit business; some fear it has the power to eliminate jobs and to upend the concept of a nation-state. It implies, above all, monumental and wide-reaching change-for better and for worse. But it is here to stay, and you ignore it at your peril. Vigna and Casey demystify cryptocurrency-its origins, its function, and what you need to know to navigate a cyber-economy. The digital currency world will look very different from the paper currency world; The Age of Cryptocurrency will teach you how to be ready.

In today's crowded marketplace, it's harder than ever to rise above the noise and clutter. For millions of businesses, a savvy approach to social media is the secret to creating sustainable engagement with a profitable niche audience. Social media d...

Are you tired of being a YouTube amateur? Do you wish you could make some real money with YouTube like everyone else? Whether you want to (1) know how to use YouTube like a pro, (2) attract more fans and customers, or (3) market effectively and mak...

All managers today are Internet managers, whether they're ready to admit it or not.  It doesn't matter if their business is large or small, old economy or new. In a faster, electronic, and more direct economy, every manager needs help. And...

FINALLY! A SOCIAL MEDIA RESOURCE SPECIFICALLY FOR DIRECT SALES! With over $150 in additional online resources, this is the book you've been waiting for. Tailored specifically to those in "party plan" and network marketing direct selling businesses, ...

The word is out: content marketing is king. But when nearly every business has a blog, it's tough to stand out. The real secret is that there's a much better tool for spreading influence and generating revenue-one with far less competition . . . . ...

Learn how to become social marketing guru increasing the effectiveness of your content. You can be a great photographer, and you even learn some Instagram tips. But social media marketing is something more. It's a science with a lot of small signs ...

To grow your business in today's economy, you need a strong online presence. But what does that entail exactly? Marketing is no longer about mass-market advertising and outbound sales; it's about capturing demand - grabbing the attention of people a...

In Internet Riches, top e-business consultant Scott Fox reveals the powerful but simple strategies that he and other entrepreneurs have used to start and build their million-dollar enterprises. Packed with interviews, action plans, and a nuts-and-bo...