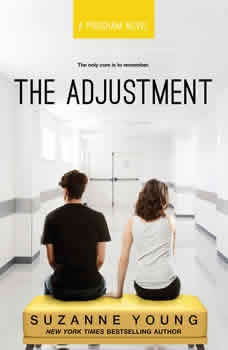 How do you go back to a life you can’t remember? Find out in this follow up to the New York Times bestselling The Program and The Treatment.Tatum Masterson never went through The Program. She never had her memory stripped, never had to fight to remain herself. But when Weston, her longtime boyfriend and love of her life, was taken by handlers, she hoped he’d remember her somehow—that their love would be strong enough. It wasn’t. Like all returners, Weston came back a blank canvas. The years he and Tatum spent together were forgotten, as well as the week when he mysteriously disappeared before The Program came for him. Regardless of his memory loss, Tatum fights to get Weston to remember her. And just as they start to build a new love, they hear about the Adjustment—a new therapy that implants memories from a donor. Despite the risks, Tatum and Weston agree to go through the process. Tatum donates her memories from their time together. But the problem with memories is that they are all a matter of perspective. So although Weston can now remember dating Tatum, his emotions don’t match the experiences. And this discrepancy is slowly starting to unravel him, worse than anything The Program could have done. And as the truth of their life together becomes clear, Tatum will have to decide if she loves Weston enough to let him go, or to continue to live the lie they’d build together. Prepare for your Adjustment.

What if your greatest secrets became public? For the students at Alexandria Prep, a series of hacks leads to a scandalous firestorm—and the students are left wondering whose private photos and messages will be exposed next. It’s Pretty L...

The Telling
by Alexandra Sirowy

A chilling new novel about a girl who must delve into her past if she wants to live long enough to have a future when a series of murders that are eerily similar to the dark stories her brother used to tell start happening in her hometown. Lana u...

Stranger Things meets The Goonies in this suspenseful yet heartwarming adventure story about a group of friends who set out to find a crashed meteor...but find mystery and danger instead as their close relationships begin to fracture.Annie, Beans, ...

There's a new boy at Shadyside High School, and he's stolen the hearts of all the girls. Good-looking, athletic Ross Gabriel is the kind of guy that every girl wants to date-including best friends Janie, Eve, and Faith. They've even made a bet on wh...

Westworld meets The Handmaid’s Tale in this start to a thrilling, subversive near future series from New York Times bestselling author Suzanne Young about a girls-only private high school that is far more than it appears to be.Some of the pret...

The Epidemic
by Suzanne Young

Can one girl help others find closure by slipping into the identities of their loved ones? Find out in this riveting sequel to The Remedy and companion to the New York Times bestselling The Treatment and The Program. In a world before The Program...

They said his uncle Ian died in a car accident. Alex Rider knows that’s a lie, and the bullet holes in his uncle’s car confirm the truth. But nothing can prepare him for the news that the uncle he always thought he knew was really a spy ...

An upper-middle grade thriller by the New York Times bestselling Nightfall authors–perfect for fans of James Dashner’s Maze Runner books.Thousands of miles south of the island of Bliss, day and night last for 72 hours...