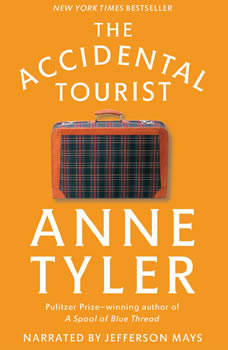 In this irresistible novel, Anne Tyler explores the slippery alchemy of attracting opposites, and the struggle to rebuild one’s life after unspeakable tragedy. Travel writer Macon Leary hates travel, adventure, surprises, and anything outside of his routine. Immobilized by grief, Macon is becoming increasingly prickly and alone, anchored by his solitude and an unwillingness to compromise his creature comforts. Then he meets Muriel, an eccentric dog trainer too optimistic to let Macon disappear into himself. Despite Macon’s best efforts to remain insulated, Muriel up-ends his solitary, systemized life, catapulting him into the center of a messy, beautiful love story he never imagined. A fresh and timeless tale of unexpected bliss, The Accidental Tourist showcases Tyler’s talents for making characters—and their relationships—feel both real and magical.